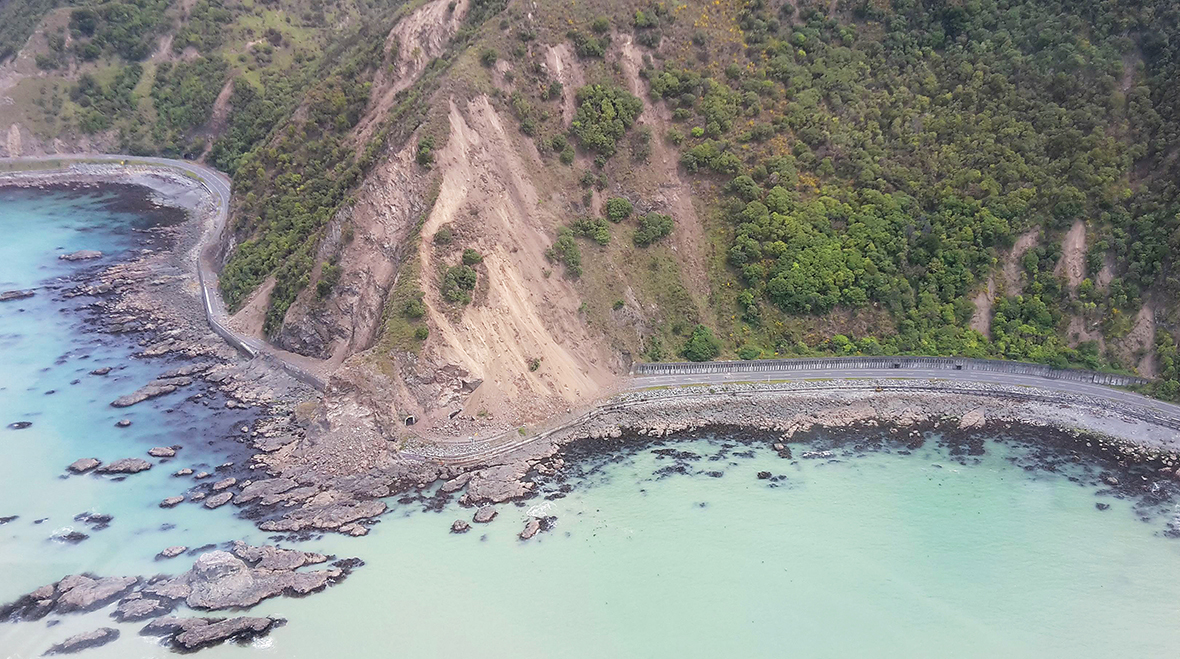 At 00:02:56 on 14 November 2016 a complex sequence of 21 fault ruptures with a combined magnitude of 7.8 Mw rocked Hurunui-Kaikōura, their collective energy tearing 250km northward at 7,200 kilometres per hour.

The seismic leviathan lasted some two minutes. Fortunately deaths and injuries were few, however, daily life became unrecognisable for thousands of residents.

At Kaikōura, a massive shoreline shelf was thrust upwards, while parts of the South Island were shunted more than 5m closer to the North Island and other parts raised by up to 8m.

The ensuing tsunami waves reached a peak height of about 2m at Kaikōura and 7m at Goose Bay. A tsunami some 5m high hit Little Pigeon Bay on Banks Peninsula.

Tsunami waves were also recorded in Wellington Harbour, Castlepoint, Lyttleton and the Chatham Islands. State Highway One (SH1) and the main trunk rail line running to the north and south of Kaikōura were blocked by slips, as was the inland Kaikōura road.

Massive changes to the sea shore and seabed had rendered the town’s port – its economic heart - commercially inoperable.

With road and rail links severed, Kaikōura township - home to approximately 3,700 people – and its wide rural catchment scattered with many farms and tiny, remote communities, were only accessible by air.

It was early on the morning of November 14

Dr Sjoerd van Ballegooy, T+T’s Geotechnical Technical Director, was on the Christchurch helicopter reconnaissance flight. Initially believing the Hanmer Springs township would be in the disaster zone, the team was surprised to find it was a reasonably peaceful, sunny day as they flew over the North Canterbury town. Hanmer had sustained a jolt and some minor shake damage to buildings, but was largely unaffected. Just 30km to the east, however, it was a very different story.

“As we flew over the township of Rotherham, we saw the first signs of damage, like major cliff collapses,” Sjoerd recalled.

“Then as we flew northwards over the Waiau River, all of a sudden it was ‘boom!’ – the Waiau township and surrounding areas were a disaster zone of fault ruptures, land displacement and massive slope failures.”

Sjoerd’s team tracked the devastation onward to Kaikōura, recording “a mess” of landslides, dammed creeks and damaged infrastructure. It was clear that there would be long-term consequences and no “quick fix”.

The earthquake’s epicentre was 15kms north-east of Culverden and 95km from Christchurch. Instead of radiating the immense seismic energy outwards, the fault rupture had started in the tiny Hurunui district settlement and progressively “unzipped” the landscape in a north-easterly direction towards the coastal townships of Kaikōura and Clarence, aiming all its seismic might at New Zealand’s capital city.

“All that energy was directed in the north-eastern direction into Wellington,” Sjoerd said. “We were surprised at the lack of damage to the south and the west of the epicentre.”

Lying 250km to the north of Kaikōura, Wellington sustained significant damage to mid-rise buildings and its port. Fortunately there were no fatalities, but had the earthquake occurred in the middle of a business day, there is no doubt there would have been significant injuries and potentially deaths.

On the ground, T+T engineers slipped into rapid response mode, compiling geospatial data from a range of sources and reconnaissance surveys by various agencies to develop liquefaction, landslide and fault rupture maps, shaking maps and to create a single spatial online viewer to assist all agencies involved in the response and recovery. These maps were updated on a daily basis as more detailed information became available. The building portfolio was also overlaid to get an indication on the number of buildings likely to be affected by different levels of shaking, liquefaction, landslips and fault rupture, to inform the insurance assessment response.

Satellite imagery was utilised to augment the land-based landslide mapping. However, cloud cover in the affected area following the earthquakes obscured some areas vital to accurate visual assessment of the damage. Dr Bapon Fakhruddin’s expert knowledge of global disaster networks saved the day.

Deploying his LODGD and IRDR connections, Bapon contacted the Chinese Government and secured additional satellite imagery captured at different times following the earthquakes, augmenting the pre-existing set of satellite images and bringing the full, mind-numbing extent of the earthquake’s effects into sharp relief.

Just 17 hours after the earthquake, T+T had provided EQC with a comprehensive report in time for its briefing with then Prime Minister John Key. Our team then went on to provide 24-hourly updates.

Users were also able to provide their own photos and observations to update the viewer, resulting in constantly evolving data sets offering improved accuracy and, subsequently, best possible outcomes for all involved.

Critically, the Hurunui-Kaikōura event has also served to highlight the immense value of international cooperation following natural disasters, not only on a local level, but in terms of international research and understanding. The Kaikōura GIS Viewer – created using T+T’s proprietary ProjectOrbit software – has since attracted global interest.

In his February 2017 letter to LODGD Co-Chair Professor Li Guoqing, the New Zealand Government’s Minister for Civil Defence and Minister responsible for EQC, Hon. Gerry Brownlee, thanked the Chinese Government for its prompt and free access to the TripleSat images.

Direct fiscal costs arising from damage caused by the Kaikōura earthquake series could reach as much as $NZ10 billion, including operating expenses (for example, EQC claims costs) and capital works expenditure.

The economic impact has been felt throughout New Zealand. Damage to road and rail infrastructure affects not only Kaikōura, but also the transport of people and freight between much of the rest of the South Island and the North Island.

T+T is privileged to be part of NCTIR, the North Canterbury Transport Infrastructure Recovery alliance, which aims to have the transport corridor north of Kaikōura fully open by the end of 2017. The inland route is now open, as is the alternative SH1 route via Lewis Pass to Picton. Dredging of the harbour is almost complete.

Improved natural hazards resilience – taking into account such things as predicted sea level rise – is part of the rebuild process. Locals and tourists alike can also look forward to seeing one of New Zealand’s most captivating coastal and marine environments restored, with improved access to, and enjoyment of, Kaikōura's natural assets.

Previous
T+T – Proud to be part of the 2020 Water NZ conference!
Next