The Director’s Award for Innovation is given for “exceptional innovation or creativity that has pushed the boundaries of current CDEM practice in NZ.”

Over the past four years Tauranga City Council has created a network of tsunami evacuation routes and safe locations in coastal areas that people previously assumed were not able to be safely evacuated.

The tsunami risk to tens of thousands of people living between Mount Maunganui and Papamoa has been substantially reduced because residents now have safe places to evacuate to, accessible routes to reach those safe evacuation points and a suite of clearly marked evacuation maps and signs to help them plan ahead.

Paul Baunton, Council’s Manager: Emergency Management, who has led the Council’s evacuation planning, said that as recently as four years ago there were a lot of assumptions but not much reliable information about how tsunami flooding would impact Tauranga.

“We needed to understand the extent of the tsunami risk as accurately as possible, so that we could confidently identify safe zones and locations. We’ve worked with natural hazard experts to gather an unprecedented amount of knowledge. Once we understood the risk we were able to develop a strategy that ensures the community has clear walking routes to reach safety,” Mr Baunton said.

“Tonkin + Taylor’s ongoing contribution to the tsunami and evacuation modelling has been essential to the process and they are rightly acknowledged alongside Tauranga City Council with the CDEM award.” 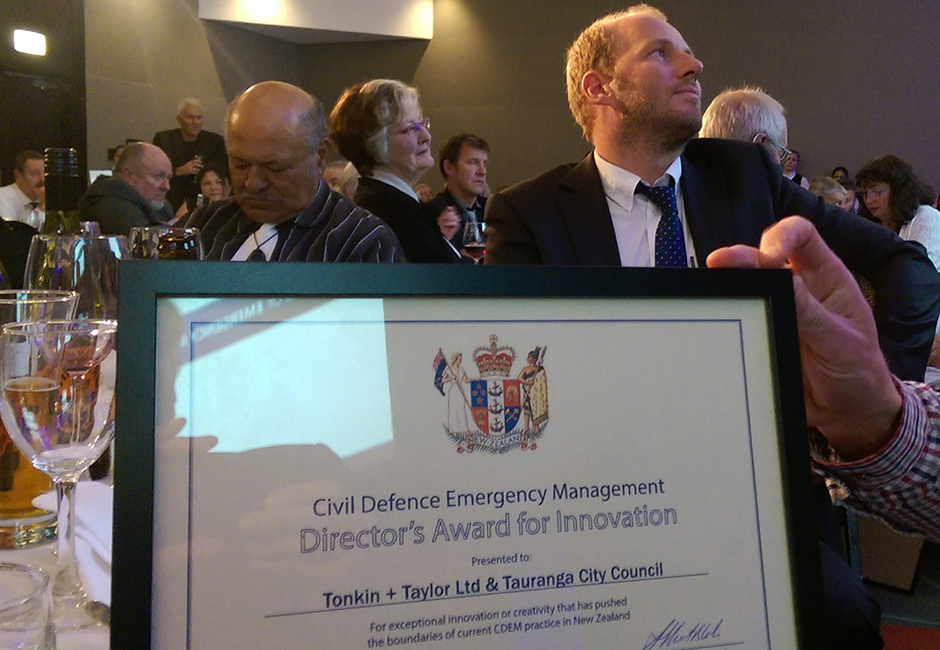 Tauranga City Council (TCC) is now firmly established as Australasia’s leader in tsunami evacuation planning and is viewed as a pioneer in providing at-risk coastal communities with innovative self-evacuation strategies and solutions - among them a Southern Hemisphere first: a purpose-built high ground structure at Gordon Spratt Reserve.

“Tauranga City Council has long lead the way in managing the effects of natural hazards from their ground breaking planning-led response to address coastal erosion and climate change in the 1990s to their present work to understand and manage the risk of tsunami inundation.

“Working with specialist experts and stakeholder groups, Council has developed an innovative and national leading approach to provide effective emergency evacuation as part of their suite of approaches to contribute to Civil Defence and Emergency Management.

“The Tonkin + Taylor team of planners, coastal and civil engineers are proud to have worked with the project lead, Paul Baunton from Tauranga City Council, to develop and implement the emergency evacuation plan,” Mr Reinen-Hamill said.

Mr Baunton said work with the community is ongoing to improve accessways and build new safe locations. “The city has come a long way in just a few years. I feel privileged to have helped lay a solid foundation towards a world class tsunami evacuation network.”

The team who worked on the Tauranga tsunami evacuation planning project included: