Airports Vanuatu Ltd, through the Ministry of Finance and Economic Management, Government of Vanuatu engaged Tonkin + Taylor International Ltd (T+TI) in association with Opus Consultants Ltd (Opus), to provide design services for the rehabilitation and proposed operational improvements to Bauerfield International Airport. The detailed design, which will allow safe operation of large aircraft well into the future, is now complete.

The project is part of a wider regional donor programme by the World Bank Pacific Aviation Investment Programme, aimed at strengthening aviation links throughout the Pacific.

The World Bank will fund an overhaul of Bauerfield’s runway, lighting upgrades and terminal facilities, along with upgrade work at Pekoa Airport in Luganville (Vanuatu’s second largest city) and Whitegrass Airport on Tanna, an island in Tafea Province.

Safety concerns arising from the severe deterioration of Port Vila’s airport have for some years been of increasing concern to the Vanuatu Government, aviation authorities and airlines.

In 2016, international airlines' repeated suspensions of flights into Port Vila’s Bauerfield Airport dealt a further series of body blows to a tourism industry still reeling from the wrath of 2015’s Cyclone Pam. The damage caused to Vanuatu by the Category 5 hurricane totalled $US360.4 million.

TTI/Opus pavement inspections, destructive testing and FWD analysis of the existing runway, taxiway and apron revealed that the pavement is in poor condition and needs urgent attention. The surface has been deteriorating to form mass failures (pot holes/loose aggregate) forcing emergency repairs.

Vanuatu is a popular tourist destination. The island nation, with a 2017 population of 275,582, was last year rated by the Happy Planet Index as the fourth happiest place in the world.

Tourism accounts for about 20 percent of the nation's economic activity. According to Vanuatu National Statistics figures released in January 2017, international arrivals by air make up 22 percent of total visitors.

The Bauerfield Airport project is vital, not only to restore safe flight operations and to encourage tourism growth, but also to deliver a level of resilience that will allow prompt and effective international aid access in the event of natural disasters such as Cyclone Pam. 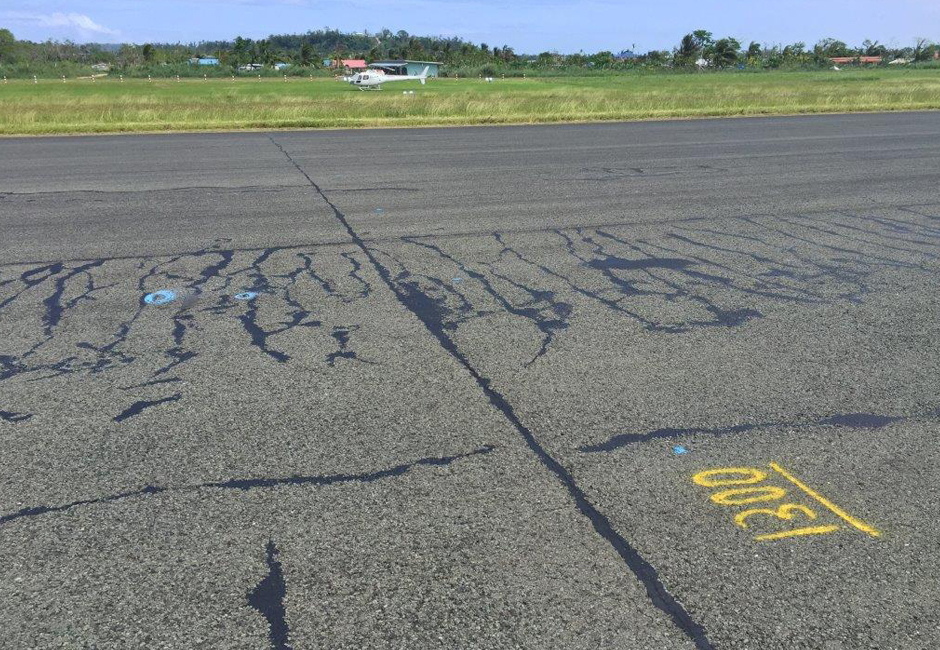 “This additional funding will enable us to continue supporting the Government to make flying safer and more reliable for locals and visitors alike.”

A number of investigations, repairs and reports were undertaken and prepared by TTI and Opus between April 2015 and January 2016 and informed the detailed design.

The TTI/Opus scope of works provides designs and upgrades to allow for safe trafficking of aircraft and movements of modern Code 4E aircraft, such as the Boeing 787B Dreamliner.

The proposed rehabilitation works have a variable minimum thickness of 60mm-215mm to achieve the design life required to cater for large aircraft and will include milling of the upper surface asphalt layers in most places, followed by a structural asphalt base overlay and construction of a new surface layer.

The new pavements necessitate additions to the existing stormwater reticulation network. The design standard adopted for the stormwater pipelines is the 1 in 10 year annual exceedance period (AEP) storm event.

The additional stormwater works consist of:

At the request of AVL/PAIP, design modelling was also completed to assess the runway pavement increase required to provide a 20-year design life for Code 4E operations, based upon an operational scenario of two flights per week. This was to meet the Vanuatu Government’s desire to ensure that the facility would meet the country’s tourism growth objectives.

Tonkin + Taylor International is pleased to have been part of delivering enhanced, more resilient aviation infrastructure to the Government and people of Vanuatu.