Auckland’s $NZD$1.4billion Waterview Connection is New Zealand’s largest and most ambitious motorway project and, from the time the idea was first floated, was more than 10 years in the making.

Following five years’ construction, it opened to excited acclaim in July 2017. Within days, Waterview was proving its economic worth, slashing commuter and freight transit times, with truck drivers reporting an average 40-minute saving on a round trip from Ports of Auckland to the airport.

Tonkin + Taylor’s relationship with the project began at its inception and, for many of our staff, it has been career defining. T+T provided a range of consulting services – the most significant being design expertise across key aspects of the project - including engineering geology, geotechnical, civil, hydrology, stormwater, ecology, environmental management and construction observation.

In addition to our core engineering work, we provided a range of specialist services and skills that were instrumental in the Waterview Connection’s success. They included the development and supply of all core IT systems and the appointment of the Alliance Culture Manager, who was responsible for ensuring high performance of the Alliance team.

The project is located in the centre of suburban Auckland, with the tunnel alignment passing under rail links and commercial and residential buildings. Tunnelling was undertaken directly beneath a multi-lane arterial route with live traffic and significant buried services.

Twin 14.5m diameter tunnels were constructed using the world’s 10th largest tunnel boring machine (TBM), specifically designed and manufactured for the project. There are 15 mined cross-passages between the main TBM tunnels, with retained approaches up to 30m deep at each end.

Waterview connects to an existing multi-lane state highway interchange and one of the city’s busiest suburban roads. The five-year project was successfully and safely constructed while minimising disruption to one of New Zealand’s busiest sections of motorway.

Design Director Mark Foster said the project was both challenging, and rewarding: “The scale and complexity of the project has pushed me, and I believe the industry as a whole, to new levels of expertise.  Everyone involved has had to perform at the highest level and push themselves to achieve such an amazing feat of engineering.”

Waterview often required smart and nimble thinking from the Alliance team - for example, when it was found that a proposed tunnel ventilation emission stack had the potential to affect a neighbouring primary school. The actual stack design was part of the architectural integrity of the tunnel portals and needed to stay. But the emissions were something the kids and their teachers could do without. So a further tunnel was bored to the far side of Great North Road and another visually stunning, but fully operational, vent stack was created.

The Waterview Connection also saw the creation of significant secondary infrastructure, including community-enhancing pathways, cycleways, skate parks and playgrounds. An ecologically sensitive watercourse (Oakley Creek), which ran through the northern tunnel area, had to be relocated, along with populations of short-fin and long-fin eels (which are at risk due to commercial eeling and habitat changes). The eels were relocated to a newly-constructed stream channel and later re-released into their old habitat.

Native copper skinks living within seven sites across the project’s footprint were relocated to a lizard-release management area. They were monitored for the five-year construction life of the project and indications are that there is a stable breeding population.

T+T ecologists worked alongside the community to create lush native plantings along Oakley Creek, as well as predator control. Along the way, botanists uncovered a new species of native New Zealand geranium. Since then some 1,500 G. aff.retrorsum Oakley Creek seedlings have been propagated and planted along the creek which, as part of the project, was freed of its enforced linear constraints and allowed to reclaim its original winding contours.

T+T is thrilled to have been part of this legacy project, which will benefit Auckland – and New Zealand – for generations to come.

T+T’s key contributions to the project include: 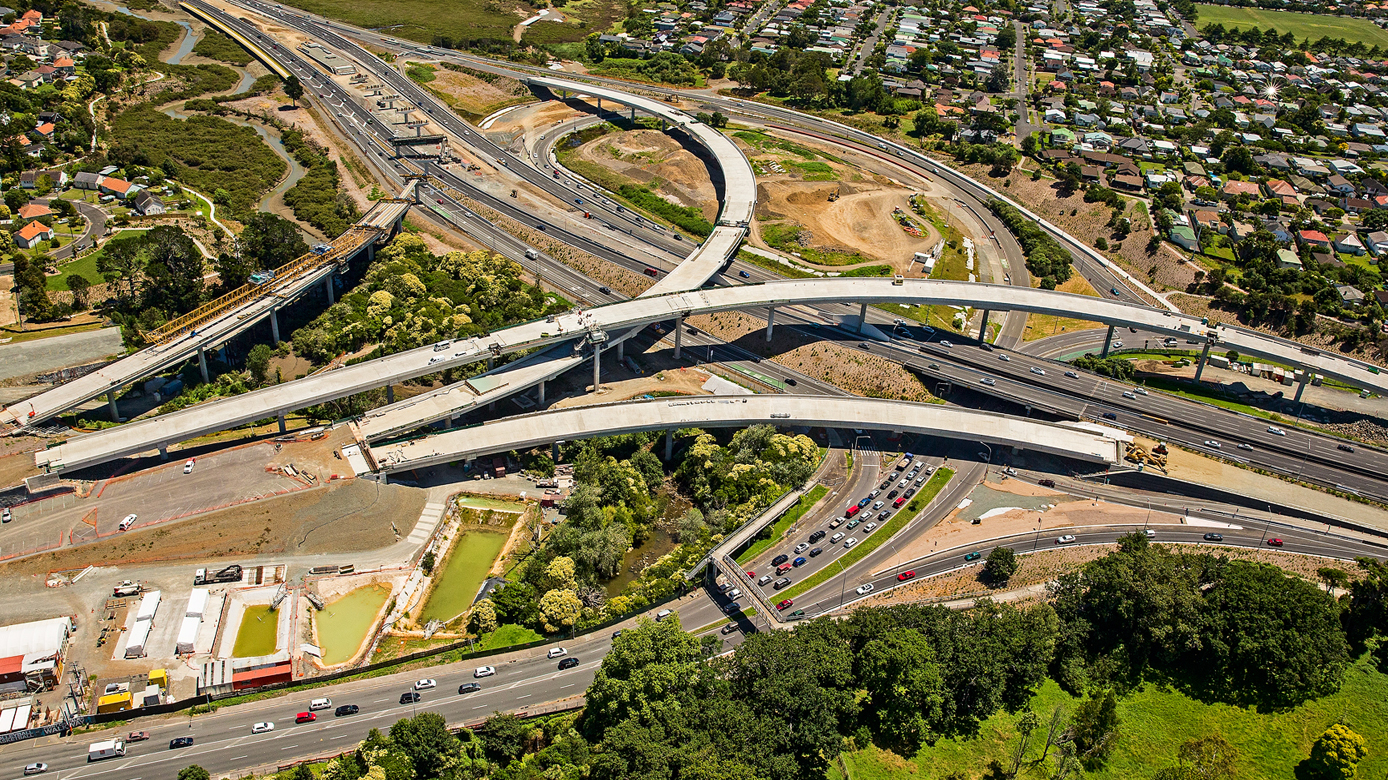 The design provided an ideal opportunity to develop smart solutions that, in turn, resulted in significant project cost reductions. They included:

In total the Alliance generated savings of $NZ36 million, through value engineering and innovations, to which T+T was a significant contributor.