Bridging the gap in Sri Lanka for Natural Hazards Resilience

“Innovation enables the humanitarian system to do more for more people...” – United Nations Office for the Coordination of Humanitarian Affairs (UNOCHA) Annual Report

T+TI was given the opportunity to deliver cutting edge, cost-effective design solutions and construction methods new to Sri Lanka. The project has resulted in a pilot programme, also funded by the World Bank, that will see five new bridges constructed in the flood and cyclone ravaged country.

It was a great opportunity for us to work alongside Sri Lanka’s very capable engineers, passing on our Geosynthetic Reinforced Soil (GRS) design and construction expertise so that they can, in future, produce their own solutions for the country’s roading network.

The World Bank is committed to investing in natural hazards resilient infrastructure, in particular in developing nations. T+TI’s design solutions will allow bridges to be constructed in a matter of weeks and to be quickly and easily repaired in post-disaster situations.

In November 2016, a report authored by the World Bank and the Global Facility for Disaster Reduction and Recovery - Unbreakable: Building the Resilience of the Poor in the Face of Natural Disasters – revealed that the human and economic costs of disasters was underestimated by up to 60%. The impact of extreme natural disasters is equivalent to a global $520 billion loss in annual consumption and forces some 26 million people into poverty every year.

“According to official government publications, the country has more than 4,000 bridges, of which approximately half are more than 50 years old, with some dating back to colonial times. 45% display significant or substantial damage.”

Sri Lankan-born Shiraz was inspired to embark on a career in geotechnical engineering following the 2004 Boxing Day tsunami, which was sparked by the 9.3 Mw Indian Ocean earthquake and killed more than 170,000 people across 14 countries.

“I was born in Sri Lanka, but left at the age of four, due to the civil conflict at the time. Our family returned to Sri Lanka - generally on an annual basis - when we were growing up. I still have strong family connections there.”

Having finished high school in Auckland in November 2004, Shiraz was considering his tertiary options, trying to decide between sports science, mechanical engineering or business: “However, the Boxing Day tsunami, which had a significant effect on the country - including some of my relatives - made me decide that I wanted to work in the area of natural disaster recovery and helping to build resilience.”

Shiraz’s place of birth has a population of some 21 million (2017) and is particularly prone to severe cyclones. In 2013, it was battered by Cyclones Viyaru and Madi, which were followed in January 2014 by a violent storm that cut a swathe across the country, leaving widespread flooding, deaths, shattered lives and ruined infrastructure in its wake.

T+TI’s initial, intensively researched desk-top study - which identified highly populated areas most at risk of damage to bridge stock as a result of severe weather events and resultant flooding - was the first of its kind undertaken for Sri Lanka.

“We gathered information from a series of publications, including disaster and risk maps", Shiraz explains. “For the disaster component, we focused on maps of weather/flooding and landslide distributions, as these were the greatest threat to the existing bridge stocks.”

“We were able to develop priority ‘hot spots’ where we felt our designs would be of most value, especially in post-disaster situations. These were later validated and updated following our in-country assessment.”

Bridge failures are regular occurrences after floods or landslides, causing huge disruption to its people and economy. Flooding accounts for 62% of all natural disasters experienced in Sri Lanka, and landslides 5%. Appropriately, the World Bank bridge project was focused on post-disaster situations and improved resilience. 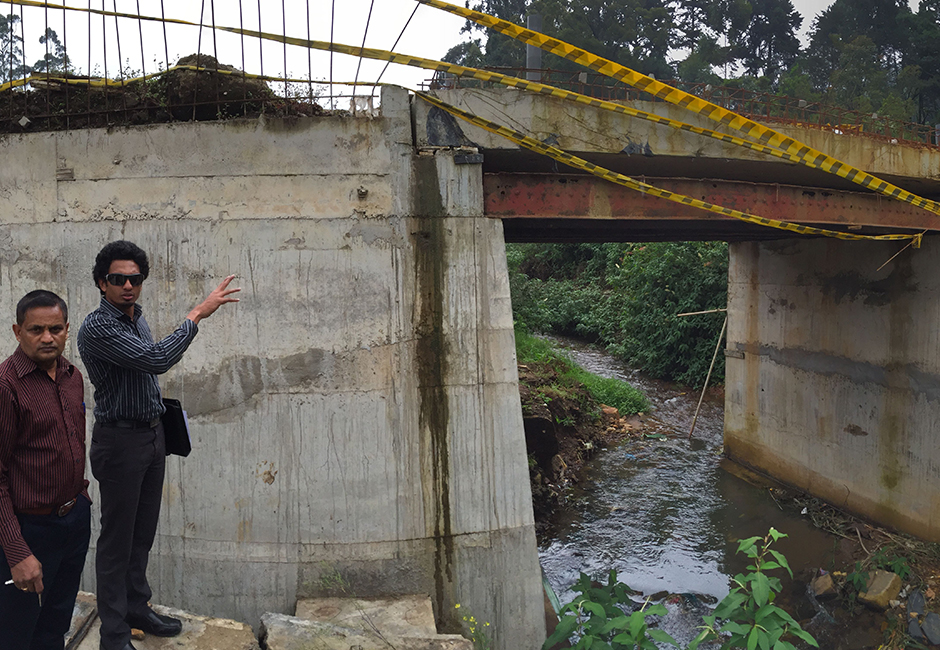 In July 2016, Shiraz, along with Geotechnical Principals Stephen Crawford and Cameron Lines, flew to Sri Lanka to undertake an in-country assessment.

Shiraz’s local contacts, language skills and genuinely collaborative approach were instrumental in the success of the Sri Lanka GRS bridges project, says Stephen: “He displayed valuable intuition and initiative on a project where the ability to adapt was essential.”

For Shiraz the bridge project was a welcome opportunity, not only to return home, but to give something back.

He says: “I was happy to be back in a working capacity, especially working on a natural disaster project. Undertaking this project was a very satisfying experience in being able to assist in some way to developing overall resilience and infrastructure in Sri Lanka.”

On the ground, the team researched the availability of appropriate materials for T+TI’s easily constructed, resilient abutment solutions, designed to be built using largely locally sourced materials and labour within a matter of weeks, rather than many months or years. It’s an approach that offers considerable economic benefits, including providing local people with paid employment at times when it is most needed.

Likewise, in the event of catastrophic floods or landslides, the abutments can be repaired quickly and easily.

“Post disaster, you want to get the bridges up as soon as possible,” Shiraz points out.

The World Bank has accepted T+TI’s final report and it’s hoped that construction of the five pilot bridges will get underway later this year.