Bapon, who developed early warning systems (EWS) for 27 Indian Ocean nations in the wake of the 2004 Boxing Day Tsunami, will be the keynote speaker at the Australasia-Pacific Disaster Management, Recovery and Emergency Communications Forum being held in Christchurch in late June.

Growing up in flood-prone Bangladesh, Bapon – the son of an academic – clearly recalls his family talking about the 1970s cyclone which ravaged his country and took some 500,000 lives. In 1998 Bangladesh suffered one of its worst floods in recent times, inundating two-thirds of the country for an unprecedented 11 weeks. Thirty million people were affected and more than 1,000 died. Bapon and his father - feeling compelled to help - made many trips into rural areas, delivering clean water to small, struggling communities.

These acts of kindness instilled in Bapon the knowledge that he was privileged, fortunate to have escaped the poverty and devastation experienced by millions of other Bangladeshi people. His early experiences of natural disasters have remained a driving force throughout Bapon’s working life. He has never forgotten the death and destruction that can come when natural forces are unleashed and how communities that lack resilience become trapped in a cycle of poverty and disease. Nor has he forgotten the importance of community. 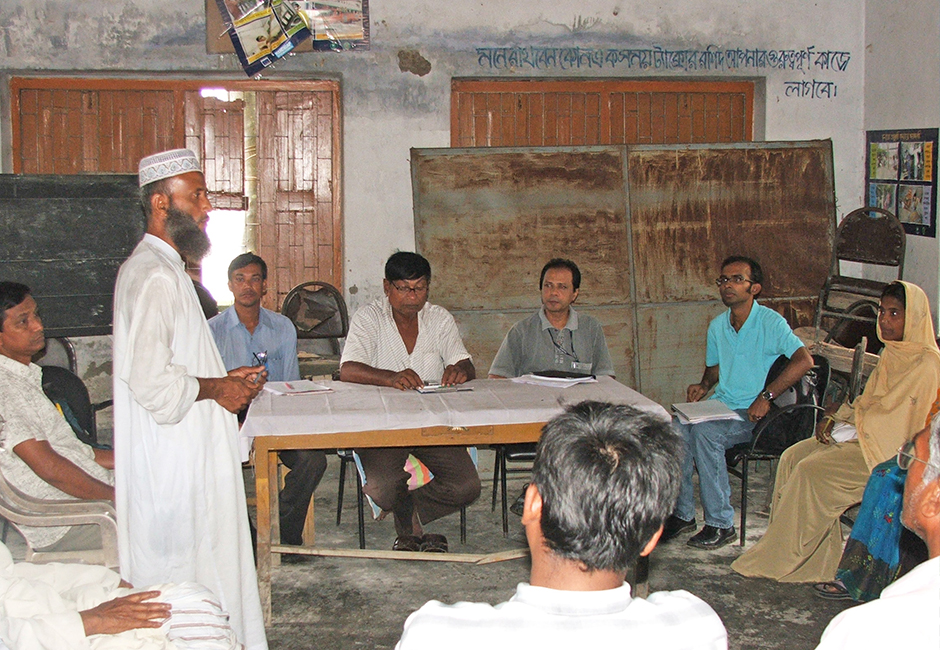 In 2007 terrible monsoon flooding struck again, affecting India, Nepal, Bhutan, Pakistan and Bangladesh. But by then Bapon had been instrumental in establishing an early warning system and his country was prepared. Local government organisations, NGOs, and community-based organisations planned for and mobilised resources for emergency response. People stored food and drinking water for 15 days, secured cooking stoves and firewood, moved livestock to higher ground and stored animal fodder, abandoned paddy transplanting and secured additional seeds for use after the floods.

Later, an evaluation of the economic benefit of the flood early warning system revealed a return of $US559 for each dollar of investment (Regional Integrated Multi-Hazard Early Warning System for Africa and Asia, January 2013).

Fiji’s current EWS highlights the importance of working from the ground up. Rather than starting with technologies, systems and a purely academic engineering overview, Bapon works from grass-roots level – beginning at the heart of at-risk communities.

Despite considerable advances in predictive technologies, hydro-meteorological “bombshells” – such as the Indian Ocean Tsunami, Cyclone Winston and the Pakistan floods - have claimed many thousands of lives, while wreaking irreparable damage upon homes, businesses and critical infrastructure and leaving impoverished economies in their wake.

“Early warning systems cannot be designed by experts alone,” Bapon says. “Even the most sophisticated system will fail if the community isn’t engaged and their needs identified and addressed.”

That often results in micro-analyses of natural hazards prone communities, many of which operate at subsistence level. The loss of crops and livestock, for example, can plunge a flourishing community into devastating levels of poverty from which they may take years to recover. Providing 48 hours to 72 hours advance warning of an impending cyclone is vital to the likes of farmers - who may need to move stock or harvest crops - and fishermen who will need to find safe harbour.

Systems themselves need to be resilient, to be tested regularly and maintained. Again, Bapon says, “Designing an effective EWS means taking into account all aspects of the ways in which communities interact and engage”.

“At-risk communities need to take ownership of their systems to ensure they continue to function well into the future,” he emphasises.

Since 2004, Bapon has forged ahead with international projects in more than 25 countries, a number of which have involved the UN. His assignments have included early warning systems for multiple hazards in Myanmar, the Maldives, Sri Lanka, Seychelles, Samoa, Indonesia and Thailand. He was also engaged by the World Meteorological Organisation (WMO) to develop coastal inundation forecasting systems in a number of territories.

Thanks to Bapon’s dedication, Tonkin + Taylor is respected internationally as having a comprehensive understanding of the importance of critical infrastructure resilience to extreme events such as heavy rainfall, earthquake, tsunami, cyclone, flood, drought and/or coastal erosion. The potential impacts can never be under-estimated; we view resilience as one of the most demanding challenges facing the world’s governments and society at large.

In its letter to Tonkin + Taylor International Managing Director, Doug Johnson, the Committee endorsed three of Bapon’s projects, including the development of an end-to-end impact-based early warning system for Asia and the Pacific.

The Committee stated: “We wish to congratulate you on your dedication and commitment, and the sincerity of your efforts in integrating best practice and research in the fields of science and engineering for both institutions and societies to mitigate disaster.”