Inside the Vector Tunnel

Imagine Auckland’s CBD without power – the usually humming and vibrant central city at a near standstill as you fumble your way to your high-rise apartment, weaving your way up flight after flight of stairs in total blackness. You breathe a sigh of relief as a neighbour, torch in hand, rounds the corner and throws some light on the subject. He’s on his way out. Seconds later you trip as darkness descends again. The elevator is a no-go, it’s been stuck between floors since the power went off days ago. The memory of the hours you spent trapped in its box-like confines, calling for help, makes you shudder.

There’s no hope of a meal. The oven and microwave fix you with a useless stare, the freezer has defrosted, leaving you with a pile of spoiled food that needs to go. You’re sticky and sweaty. It’s stiflingly hot, but there is no respite to be had from the cooling blast of the air conditioning. Outside, the streets are eerie places, the cafes, shops, offices and restaurants are closed and the air is filled with the intermittent blast of car horns as frustrated motorists navigate their way through a city without traffic lights.

The local economy faces catastrophic losses. The businesses and Government agencies that can are moving out of the city to temporary premises, while other, smaller enterprises treading a thin financial line face bankruptcy. Worse, there seems to be no end in sight. It’s time to pack up and bail to Mum’s, a friend’s house, anywhere where you can get a decent feed, surf the net, wash your clothes and shower. Anywhere but here.

It seems impossible that this could happen, yet 21 years ago, in February and March of 1998, Auckland’s CBD was brought to its knees when a series of infrastructure faults left it with major power shortages for five weeks. Struggling to meet the growing demands of residents and businesses seeking air-conditioned relief from the heat of an El Nino summer, the CBD’s ageing underground power cables, destabilised by the increased rising temperature of the earth through which they snaked, failed one by one.

As the air filled with the roar and smoke delivered by thousands of diesel generators, Mercury Energy moved to install temporary overhead cables along the rail corridor in an atmosphere of public and Government outrage. By late March, the worst power outage in New Zealand history was over, although power cuts continued for another couple of months and, although relieved, the city remained nervous.

But beneath the streets, a legacy project with a design life of 200 years was already underway to ensure a resilient power supply for Auckland – the $200 million, 9.2km Vector tunnel. A year earlier, a tunnel boring machine and a road header, working 20 metres to 100 metres below ground level, had begun carving their way through tonnes of rock and soil to create a 3m diameter tunnel to house the city’s new, future-proof electricity infrastructure. The project was to become a celebrated milestone in Tonkin + Taylor’s 60-year history, as well as providing a highlight in the careers of our engineers. 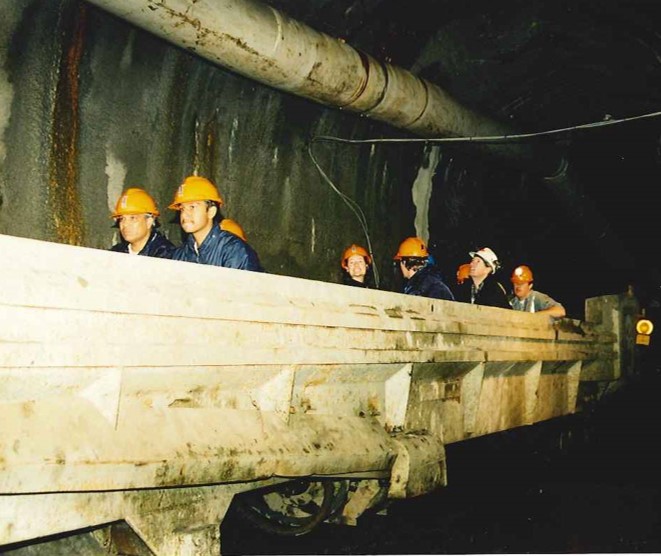 T+T had just completed the Victoria St power tunnel for Auckland Electric Power Board (AEPB) and Peter Millar suggested that we should include a tunnel option as well as the 40 or so trenched options.  This option was costed, with T+T quietly concluding that it was unlikely to happen, as it was significantly more expensive to excavate a single tunnel than to excavate twin trenches, although it has to be said that the trenches were configured in such a way that they required full closure of many roads along the route during construction.

Then it went quiet for four or five years.  Behind the scenes, AEPB and TransPower had recognised the need for additional cable circuits, but each was hoping the other would fund them.  Finally, AEPB, now rebranded as Mercury Energy Ltd (MEL) - and the one with the greater need - came to us to commission the detailed design of a tunnel! We were admittedly surprised, given the high cost. But electrical engineer Murray Hood patiently explained that the tunnel had three major advantages over trenching.

A tunnel meant no road closures or inconvenience to motorists and while the civil engineers thought the tunnel was expensive, compared to the cost of the cables it was a steal.   Creating a tunnel also allowed MEL to defer purchase of the cables until the entire route was complete, rather than having to install them as a trench progressed.

Best of all, a tunnel was future proof, allowing for additional circuits to be installed at will with no additional civil costs.

By 2000, just two years after the blackouts that almost paralysed the CBD, the Vector Tunnel (MEL further evolving to become Vector part way through construction) was complete, the project having undergone several stakeholder iterations. Delivering 520 megawatts of power - about half of the capacity of Huntly Power Station – the tunnel even has its own internal light rail system. It has continued to keep apace of Auckland’s growth and will do so for generations to come. TransPower now leases space in the tunnel to deliver 110 kV supply from Penrose to the Harbour Bridge and further north.

Vector CEO Simon Mackenzie, says his Company is proud of the project, commenting in a recent Stuff interview: "The tunnel is an awesome piece of engineering… a significant asset….”

It’s a proud part of T+T history too, and our relationship with the Vector Tunnel continues to this day. After almost 20 years, for some T+T staff, like civil engineer Keith Dickson, who undertook the initial TransPower feasibility study before moving on to become civil design manager and, subsequently, Engineer to the Contract, the Vector Tunnel still remains central to their work.

Keith still affectionately claims the tunnel as his “baby”, saying as recently as 12 June 2019:

“Twenty years since we finished the tunnel and Vector still pay me to go to meetings to look after the tunnel when others want to do work around it …. Hasn’t happened since 10 am however!”