Tunnel 21 is a KiwiRail tunnel situated on the Main North Line (MNL) between Ward and the Ure (or Waima) River, about 45 minutes south of Blenheim. The tunnel was constructed during the ‘Golden Age’ of the railways (1870s – 1945), with the tunnelling works completed in 1913. At this time, the MNL was segmented along the east coast of the upper South Island, with this section of the line starting in Blenheim and extending towards Kaikōura. It reached Seddon in 1902, Ward in 1911 and then Wharanui (13 km south of Ward) in 1913, before the onset of World War 1 saw progress halted and 7529 railway workers released for war service. Thousands were again released during World War 2. The MNL was finally completed in 1945, the feat marking a significant point in history as New Zealand’s longest railway construction project. The line now spans from Addington in Christchurch to Picton in Marlborough, along a total length of 348 km. In its heyday, there were 65 bustling stations along the route.

Tunnel 21 is also known as the ‘Tar Barrel’ and extends 167 m through a weak and fractured mudstone rock, adjacent to the London Hill Fault. New friends from the local Seddon pub suggested that the name may have arisen from the presence of a dark, organic tar-like material encountered during the tunnel’s construction. Our geotechnical investigations are yet to locate any of this material - but don’t worry, it’s on the risk register! The tunnel is lined with in-situ concrete and concrete blocks which have seen better days. Records dating back to the 1970s show there was cracking in the concrete lining and recommendations for repair works were proposed. Since then, only minor works have been done and with the recent Seddon and Kaikōura earthquakes, the tunnel’s condition has deteriorated. Whilst local repairs and ongoing maintenance keep the tunnel operating safely, KiwiRail would like to improve the long term resilience of the MNL, while also increasing the line speed, therefore reducing travel time and reducing operating costs.

Options for remedial works were first explored by NCTIR in 2017, before T + T was engaged to work alongside KiwiRail to lead a multi-disciplinary team of consultants to advance the project. Since then, the project has run at bullet train pace, with the team performing an options assessment, geotechnical site investigations, property acquisitions and detailed design, as well as resource consent and change of designation applications. The project was tendered in late March 2019, in parallel with detailed design. With the tender being awarded in May 2019 and the main works contractor arriving to site to start construction work pretty promptly in June, it was rewarding to see physical works starting to materialise so quickly after all the initial hard work. As a result of the options assessment process, KiwiRail decided that the preferred solution was to decommission Tunnel 21 and re-route the railway through a hill and beneath State Highway 1 (SH1), a little further south of the existing Tunnel 21. The end result will be a rail realignment length of c.1000 m and a road realignment/change in grade length of c.700 m. All in, c.400,000 m3 of mudstone will be excavated and transported to nearby fill sites, leaving cut slopes up to 35 m high. There will also be a new c.100 m long rail underpass structure and approach retaining walls crossing beneath SH1. Some people say we’re replacing a tunnel with a tunnel, but we say it’s an underpass! The project team have had to overcome a number of complexities including seismic risk, slope stability issues arising from the weak and fractured mudstone, the presence of organic materials and predicted settlement beneath the proposed rail underpass structure, the presence of significant wetlands, integration of stormwater control systems, and planning and consenting challenges.

The project has drawn on many of T+T’s finest skillsets across numerous disciplines and offices. As the lead consultant, we have performed project management, design management, geological site investigations, geotechnical design, civil and stormwater design, ecological services, planning and environmental services. To round out the team, we partnered with Vitruvius to carry out the road and rail geometrical design, Holmes Consulting for the structural design, Beca for the pavement design, road safety audits and peer reviews, and with The Property Group for property acquisition services. Whilst a majority of the team is based in Nelson, we’ve been supported by staff in Christchurch, Wellington, Hamilton and Tauranga. This project has really showcased how we can successfully deliver major projects from our regional offices, using a team drawn from all over the country. This has been made possible with tools such as Skype for Business, Microsoft Teams, Project Orbit, our agile work environment, and a client who doesn’t see distance as a barrier to success. Feedback from our client has been really positive. With the Labour coalition government pledging $1 billion of investment in the rail network over the coming years, we believe we are in a good position to continue to deliver more exciting and challenging projects.

From the Golden Age to rejuvenation by a younger generation

As I write this article, I think of my grandfather who made a career in the railways. This story will be true for many of our (great, great-great and great-great-great?) grandparents, who spent their days working hand tools, horses, and wagons. This must have been both an exciting time of stream trains and growth of a nation, but also a time of hardship and uncertainty.

I feel fortunate to be involved in the rejuvenation of New Zealand’s railway, which I believe is set to prosper to new levels. New Zealand is looking for ways to reduce road congestion through mass public transport, reduced road freight, reduced emissions and ensuring that we have a rail network resilient to climate change and other natural hazard related challenges. Unlike the people of my grandfather’s day, we live in relative peace and prosperity. Coal and steam power has been replaced by diesel and electric engines, while horses, picks and shovels have been replaced with 85 tonne excavators, 40 tonne bulldozers and 45T dump trucks.

Possibly best of all, my ‘smoko’ breaks consists of a flat white and a scone from the local Ward cafe, in place of a tobacco pipe and stale jam sandwich. We could just be experiencing the return of ‘The Golden Age’ of rail! All the toys out in force New 1600 diameter culvert being installed beneath the MNL 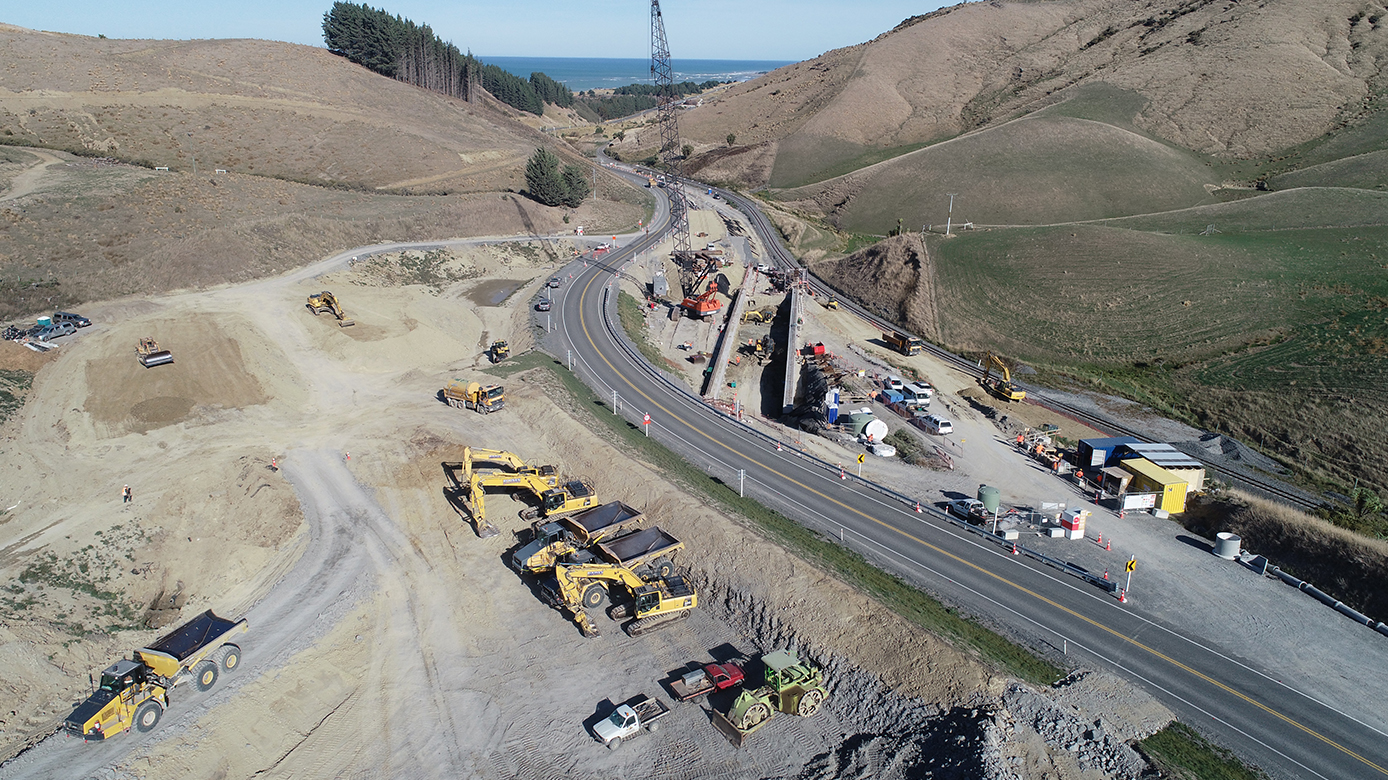 Construction of the new ‘Tar Barrel Tunnel Bypass’ with a temporary diversion of SH1 in place until the road can be directed over the roof of the new rail underpass.