At T+T, we’ve got a range of expert Geomorphs across a range of specialisations – from Fluvial Geomorphologists to Coastal Engineers to Engineering Geologists and more!

We’re kicking things off with some colour and catching up with Jesse Beetham. Jesse is is an Engineering Geologist based in our Tauranga office and he deals with plenty of LiDAR to help him identify geomorphic terrains and to construct geomorphic maps.

Q: So Jesse, first things first – what is LiDAR?

Jesse: Light Detection and Ranging (LiDAR) is a remote sensing technique that uses lasers/reflecting signals to create images of the ground surface. LiDAR can provide high-resolution data about the elevation of the ground surface. This remote sensing technique is often gathered by aircraft such as planes, helicopters and drones. There are several different outputs that can be generated from LiDAR data but the main output I have used are Digital Elevation Models (DEM). DEM are 3D models of elevation data produced to represent terrains.

Q: Quite a bit of colour here, what’s going on?

Jesse: What you’re seeing in this image is a high-resolution, LiDAR derived, DEM of Whakatāne, in particular, the Whakatāne River mouth.

In this DEM, several geomorphological terrains can be identified, that being the active dunes along the coastline, the fixed foredunes representing historic shorelines, the alluvial lowlands associated with the Whakatāne River and an elevated, fault bound (Whakatane Fault) mountain range.

The fixed foredunes in this image prograde in an eastward direction towards the present day Whakatāne River mouth. Each curved dune section represents an historic location of the river mouth. These geomorphic terrains derived from the DEM can be used to understand the likely ground conditions in the area.

For example, the sediments deposited within the alluvial lowland terrain were likely deposited in a variety of environments, depending on the proximity to historic river channels. This is likely to result in a variety of fine-grained and coarse-grained sediments, both cohesive and non-cohesive, while the dune terrains are likely to comprise granular, coarse gained sediments with little variation in soil characteristics.

Thanks to LIDAR imagery, we can get a fair idea about the likely ground conditions on a site without leaving the comforts of the office! 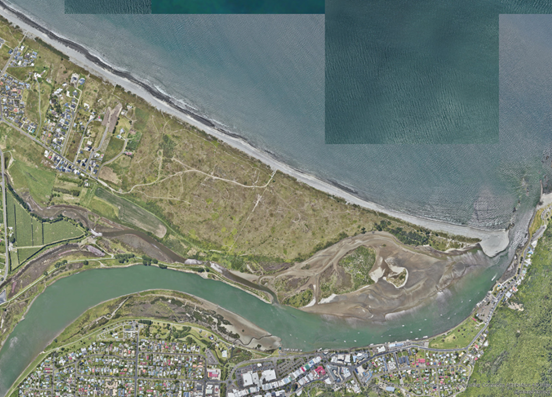 Q: What’s the goal/reasoning behind using LiDAR on this project and why’s it so important?

Jesse: The LiDAR imagery and associated DEM was used to construct a geomorphic map of a pre-defined study area. This geomorphic map was then one of the components used in a liquefaction vulnerability assessment. Mapped geomorphic terrains can then be used to identify areas of land that are likely to be vulnerable to liquefaction. Geomorphic terrains expected to be underlain by silt, sand and gravel sediments (e.g. alluvial lowlands and flood plains etc.) are more likely to be vulnerable to liquefaction compared to various types of elevated and sloping terrains.

This information is invaluable for developing land within the shaky isles of New Zealand. Liquefaction related damage similar to that observed following the Christchurch earthquake sequence could occur again in many cities across New Zealand. Identifying these liquefaction prone areas before the next liquefaction-inducing earthquake can help local authorities, government agencies and other key stakeholders to build more resilient infrastructure in the right locations and be better prepared for the effects of liquefaction on the communities they serve.